Click on a thumbnail to view the full-size image 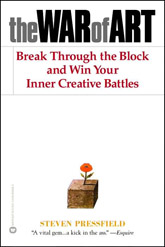 On March 31, 2003, I began reading The War of Art by Steven Pressfield. What I found so remarkable about this book was how the author seemed to be speaking directly to me. He identified the fundamental roadblock to creative expression and achieving success. In a word: Resistance. According to Pressfield, Resistance is that malevolent force within us all that prevents us from pursuing any creative aspiration. In fact, the goal of Resistance is to simply talk you out of ever being creative again by systematically, consistently, and repeatedly forcing you to question your worth and your talent and your ability to be who you really are.

Pressfield compares Resistance to a firebreathing dragon hellbent on our ultimate destruction. It is up to the artist to take up the sword and battle that son of a bitch every single day. By choosing not to fight, we have already lost. To help me visualize Resistance as a dragon, I have a framed illustration of a fierce dragon in my studio, along with a pewter sculpture of a knight brandishing a sword in his own battle with the Beast.

For years after college I would find myself struggling to sit down at the drawing table and do my work. I'd put it off 'til later, make excuses, and come up with new projects that would usurp my valuable drawing time. I've identified the feeling I undergo whenever I move from the couch to the drawing table. Remember the scene from The Matrix where Neo takes the red pill and his mind goes through that traumatic transformation? Well, my drawing brain is so unlike my non-drawing brain that the transformation I must undergo just to sit at my drawing table is as traumatic as that scene in The Matrix. While I'm there—and for hours afterwards—I'm on a kind of high to which nothing else can compare. To me, the computer-generated system known as The Matrix in the movie is Resistance, and the battle against Resistance is as much a constant battle as the one featured in the movie.

To date I have read The War of Art eight times. I own two copies that have been personally autographed by the author. If you have a solitary creative nerve in your being, you must read this book. I urge you to visit Steven Pressfield's website and purchase a copy.

All of the illustrations presented here were created during this "War of Art" period (since March 31, 2003).